Persevere: To persist steadfastly in pursuit of an undertaking, task, journey, or goal, even if hindered by distraction, difficulty, obstacles, or discouragement.

When it comes to creating change in your life or achieving your goals, it probably won’t be easy. You may struggle. It’ll likely take longer than you expect. It’s almost certain that you’ll have setbacks and short-term failures along the way. Especially when it involves creating new habits, developing new skills or learning new concepts. This helps explain why most people fail to achieve their New Years’s resolutions.

Struggle, setbacks and short-term failures don’t have to drain your motivation. They don’t have to make you want to quit before you’ve put in enough time and effort to reach your goal. In fact, psychologists who study motivation and achievement say it could be just the opposite; as long as you adopt the right mindset.

According to decades of research, there are two fundamental belief systems, also know as “mindsets,” that determine how people respond to struggle, setbacks and failure when pursuing their goals. In one mindset, you’re likely to get discouraged and give up on your goal. In the other, you tend to embrace the struggle, learn from the setbacks and keep moving forward – you persevere.

Before I tell you more about these two mindsets, I want to share this inspiring, true story about a boy named Stevie.

His mother called him Stevie. He fancied himself a writer. He wrote his first story before he was old enough to shave. His mother liked it; said it was good enough to be in a book. A few years later, he sent one of his stories to a magazine, hoping to get it published.

Unlike his mother, they rejected it.

Ten years came and went, along with many more rejection letters.

Stevie – now a struggling, 26-year-old school teacher with a wife and two children – receives a telegram from Doubleday publishing. They tried to call him on the phone, but Stevie and his wife were too broke at the time to afford telephone service. That was about to change though, because the telegram was not another rejection letter.

Doubleday had agreed to publish Stevie’s first novel – a horror story about Carrie White, a teenage girl with telekinetic powers. They paid him a $2500 advance for the book. Not long after, paperback rights to Carrie sold for $400,000, and Stephen King was well on his way to becoming one of the most prolific and successful writers of modern times.

Image source: This is a Book by Demetri Martin

I’m always inspired by stories of how successful writers like Stephen King started out. How they struggled for years. How they endured rejection after rejection, failure after failure, but kept moving forward. Kept honing their craft. Kept chasing their dream.

J.K. Rowling is another fine example. Depressed, practically broke and living on welfare, she was rejected by a dozen publishers before she finally found one to publish her Harry Potter book series. As you probably know, she’s now a multi-millionaire. 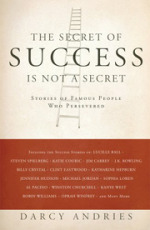 Of course, it’s not just famous writers who struggled their way to the top. If you study the background of any successful person in any field, you’ll often see a long road of struggle, setbacks and failure stretching out behind them.

Maybe these people were blessed with raw talent, intelligence, luck or other advantages the rest of us lack. Maybe they weren’t.

“When we hear about extremely successful people, we mostly hear about their great accomplishments – not about the many mistakes they made and the failures they experienced along the way. In fact, most successful people throughout history are also those who have had the most failures. That is no coincidence. People who achieve great feats, no matter what field, understand that failure is not a stumbling block but a stepping-stone on the road to success. There is no success without risk and failure. We often fail to see this truth because the outcome is more visible than the process—we see the final success and not the many failures that led to it.”

— Tal Ben-Shahar from Choose the Life You Want

Do You Have a Fixed Mindset or a Growth Mindset?

What do you believe about human qualities, such as talent, intelligence and creativity?

How about character traits like self-discipline, grit and willpower?

With a fixed mindset, you believe traits like these are largely static and predetermined by your genes and upbringing – either you have them or you don’t. Through the lens of a growth mindset, you see them as malleable skills that you can cultivate and strengthen over the course of your life (science proves this to be true, by the way).

This distinction between the fixed mindset and growth mindset emerged from the work of Carol Dweck, Ph.D., and her colleagues. Dr. Dweck, a psychology professor at Stanford University, has spent her career studying motivation and achievement. In her bestselling book, Mindset: The New Psychology of Success, she presents an airtight case that a growth mindset can help strengthen your motivation, even when the going gets tough.

“In a growth mindset, people believe that their most basic abilities can be developed through dedication and hard work … This view creates a love of learning and a resilience that is essential for great accomplishment. Virtually all great people have had these qualities.

“Teaching a growth mindset creates motivation and productivity in the worlds of business, education, and sports. It enhances relationships. When you read Mindset, you’ll see how.”

How the Fixed Mindset Weakens Your Motivation

The human mind is a meaning-making machine. Whether you’re aware of it or not, you’re constantly monitoring what’s happening around you, interpreting what it means and deciding what to do about it. This is obviously an important process for your survival, but it’s also the main driver of all your suffering – especially when it’s shaped by the fixed mindset.

When you struggle or fail to achieve your goals, you make that mean something about yourself. In the fixed mindset, it means you’re simply not good enough, or that you somehow don’t have what it takes. For example, have you ever thought or said things like:

It’s healthy to acknowledge your limitations and recognize where you can be doing better in your life. But that’s not what’s happening in the fixed mindset.

Remember, the fixed mindset believes that talent and abilities are largely fixed and predetermined – either you have it, or you don’t. If you have what it takes, great. If not, why even bother to try? You might as well give up, and move on to something easier.

How the Growth Mindset Strengthens Your Motivation

The growth mindset interprets challenge and failure much differently than the fixed mindset. Remember, the core belief of the growth mindset is that human abilities and talents are malleable skills that you can cultivate and strengthen over the course of your life.

The fixed mindset mistakenly views your limitations as permanent. The growth mindset understands they’re just a starting point – guiding stars that tell you where to focus your energy toward personal and professional development.

The growth mindset is an antidote to defeatism. It interprets challenge and failure not as a signal to throw in the towel, but as a natural, healthy part of human growth and achievement.

This may sound like good ole’ fashioned positive thinking, and maybe it is. The difference is these conclusions are based on 40 years of rigorous, scientific research – hundreds of studies that all say the same thing. If you want to strengthen your motivation, achieve your goals and lead a more fulfilling life, you’re best-served by a growth mindset.

As I’ve said many times, success rarely comes easily. Anyone who’s ever reached a level of success or made a change in their life had to overcome challenges, setbacks and short-term failures along the way. Some more than others, I’m sure, but ultimately, they all persevered. They all kept moving forward, regardless of the challenges they faced.

If you want to protect your motivation, and keep moving forward, always make the growth mindset choice.

There are 29 brilliant comments

This site uses Akismet to reduce spam. Learn how your comment data is processed.